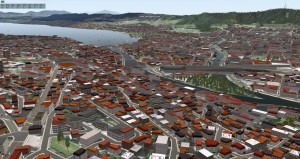 Open Street Map (OSM) sceneries are made of open street map data with a tool named osm2xp, which is available for different OS 32/64bit. OSM data is published regularely e.g. at geofabrik.de, where it can be downloaded and processed. Most OSM data is converted into a scenery file.

Various settings influence the result. Newest osm sceneries have smart exclusions, i.e. if osm data is available, autogen is excluded – only for these areas. So they can’t penetrate each other. Additionally multi polygons are processed, showing now larger forests and buildings with inner yards. And some improvements where made on objects and facade set.

All other continents have osm and autogen objects separated by smart exclusions.

4492 downloads
Showing 1-1 of 1
Recent Posts
Disclaimer & Support
This is a private web site - all files are free and for private use only. It is NOT allowed to redistribute or publish any file - or to use any parts in a commercial product!